Why Republicans Should be Pleased with the DOMA Ruling

Just a couple days ago, on July 8th 2010 a Federal Judge ruled that section 3 of the Defense of Marriage Act (DOMA) was unconstitutional. If you aren’t familiar with DOMA and Section 3 you should know that it established an official definition for the word ‘marriage’ as the legal union only between one man and one woman, furthermore it required the word `spouse’ refer only to a person of the opposite sex who is a husband or a wife.

Judge Tauro came to his ruling for various reasons; the atmosphere at the time of  DOMA’s passage in the senate was one where epithets and religious jargon were openly used in the chamber to describe the homosexual act leading him to believe that DOMA was intended to punish a group of people that were politically unpopular,  nor did the law do anything to protect the family as was it’s stated cause, most importantly for the purposes of the points I intend to make is that Section 3 in particular is a violation of States Rights as guaranteed by the Constitution in the Tenth Amendment.

One of the original resolutions held by the Republican National Convention has been the preservation of States Rights and this recent DOMA ruling returns to the States the right to define marriage as they see fit – so I think that Republicans should be partying in the streets!

Sadly this isn’t happening because the fact is that every single Republican Senator at the time voted to pass this bill, they voted not only AGAINST their original platform but also against their standing platform at the time. This begs the question:  Are there any real Republicans left? The elected Republicans allow for their hatred of a minority group to completely dismiss the foundational statutes of their organization so much so that they don’t even recognize when they’ve done it!  These people aren’t Republicans – they simply take the name because they can use it to appeal to a mass of voters who also don’t know or care about the real Republican party. These people are NeoCons at best and from what I’ve seen they are wholly uninformed or unconcerned regarding what they once cared about greatly.

Will the real Republicans please stand up?

Now, lets not forget the Democratic Party here either. The Democrats are often (wrongly) seen as the party of the people whom fight for civil and economic justice – 32 (if I counted properly) Democrats in the Senate voted to pass DOMA while only 14 did not. This doesn’t at all sound to me like the party that defends minorities and freedom, it sounds to me like a member of a false dichotomy or in other words, the other side of the Republican coin.

I personally refuse to claim either party, they both make me sick, but I’d be a lot more likely to support the Republicans if they’d return back to that original and beautiful platform that once united them.  As for the DOMA ruling – hopefully this will bring my gay and lesbian friends ever closer to no longer being treated as a second class citizenship. 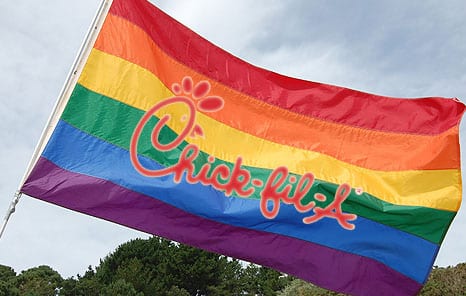 Jesus for Sale: The Church and Capitalism