I recently witnessed an assertion about proving god’s existence to atheists by a Christian that made the following claim:

Ask 1000 people what proof/demonstration by God it would take to belief in Him and you may get 1000 different responses. At the end of the day each person has different doubts and needs, and their proof of God’s existence will be different to meet their needs.  ~Anonymous

Proof and evidence aren’t words that can simply be exchanged for each persons perspective. Something either proves a hypothesis or it doesn’t so if the data analysis from two different people determines that the evidence either proves or doesn’t prove something one or both are incorrectly analyzing the data.

Any data analysis will rely wholly on human ability to comprehend data, meaning not only does a matter of faith become a matter of flawed and failing human interpretation of data (evidence) it is also singularly held as opposed to a far more reliable and self policing requirement of peer review. Peer review, multiple testing cycles, and the fact that in real science one must make a hypothesis PRIOR to making conclusions are why “creation science”, “intelligent design”, and other pseudosciences don’t convince the non-believer that god is real – not because many of us fail to interpret the creationist data set properly, but because the data set itself doesn’t meet the standards of the Scientific Process – a process that we know works.

Rather than the conclusion that proof is different for each of 1000 people, a better conclusion would be that the interpretation of data is different for 1000 people and all 1000 of those people will often come to contradicting or nonsupporting conclusions about the same data-set. So with this question nothing has been proven to anyone – some or even all parties have accepted incredibly flawed data – and interpreted it according to their arbitrary requirements for proof. If science worked this way any experiment  could net 1000 different results for 1000 different reasons because results would be decided by prejudices and not logic.

I think Benjamin Franklin provided us with an excellent example of why the Christian’s conclusion here is problematic. He is quoted as saying: 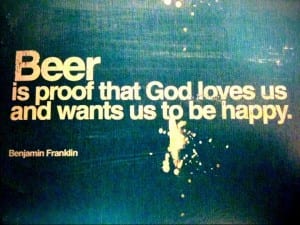 I love beer – micro-brew, fancy, dark, bitter, and strong (anything that isn’t owned by the Big 3 breweries really) so this statement greatly appeals to my love of beer and were I a less scrupulous person I’d without a doubt use beer as the ultimate undeniable proof of god’s existence and benevolence. Beer seems to be the most divine thing I can think of…yet – despite my obvious and undeniable bias toward beer I simply have to reject it as evidence for any sort of god because I know that doesn’t meet the standard of evidence.

Reason for the Season