Exploitation: Children in the Pulpit 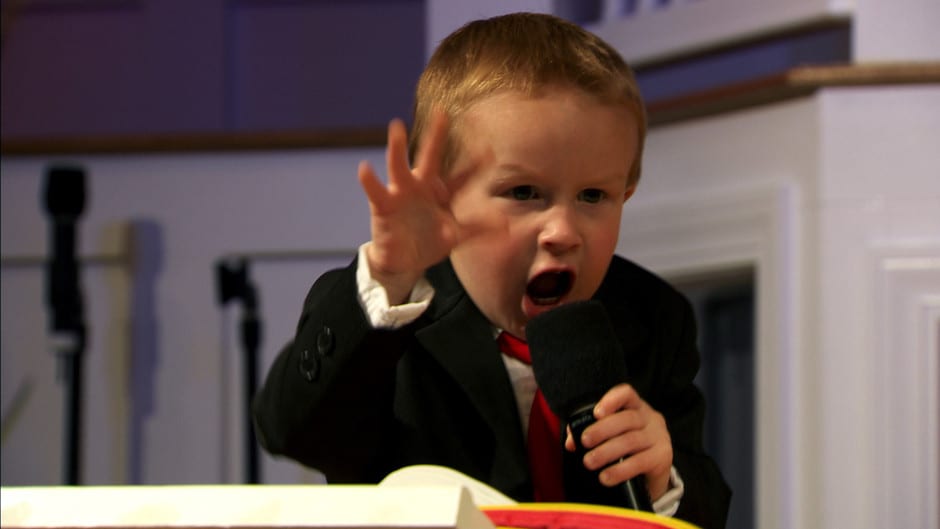 A few nights ago my wife and I happened upon a National Geographic documentary about child preachers called “Pint-Sized Preachers”. My wife said I shouldn’t watch it because she knew it would elevate my blood pressure.

The first of the child preachers, Kanon Timpton – age 4,  became famous when a video of him mimicking his father’s  United Pentecostal preaching style on stage received millions of views on Youtube and went viral for weeks.  I remember the first time I saw it and how disgusted I was; not only at the millions of people that thought this was either cute or somehow evidence of the power of their god, but also the parents and the church full of people that were cheering him on.

Kanon’s “preaching” consists of little more than well timed shouting and breathing into the microphone – outside of those things the content is no better than gibberish with sprinklings of words like “God”, “Jesus”, and “Victory” while pointing at or slapping the Bible dramatically – a Bible he isn’t old enough to read. He’s merely mocking  his father, picking up on the mannerisms and words that are most often used – and reveling in the applause of the crowd. His Father believes that the “Holy Ghost” is interceding when his child is on stage despite all the obvious signs that all the words and actions of this child are empty.

The other two young men are a bit older;  12 year old Terry Durham from Ft. Lauterdale, FL and  12 year old Matheus Moraes from Rio de Janeiro.  Both of these young men carry themselves like adults when in front of the camera and the crowd. They are both being groomed by people that can gain from their success.  Durham’s grandmother, a Baptist minister herself,  has been convicted of fraud in the past and in order to “protect him” must handle all of the monetary transactions for him.  Moraes is surrounded by professional ministers that focus on a Word of Faith doctrine that produces ample proceeds in the offering plate. He is extremely well dressed (though surrounded by poverty) and even has a website where you can buy his DVDs and become a partner with his ministry in the style of Benny Hinn and other televangelists.

The latter two provide an insight as to what can be expected from 4 year old Kanon further down the road.  Once his mimicry starts to include intelligent English and seems less rehearsed he too will be thrust into a preaching tour and he will be considered a prodigy by thousands of people, I suspect that the UPC church (A  fundamentalist cult) will use him to grow their numbers and influence. Doing so will be a crime against this little boy and will destroy any semblance of a childhood he might have.

Maybe the first video was of 18 month old Kanon WAS cute to some degree. I mean, how can something a little baby does not be cute right? Were that video the end of Kanon’s story I’d be less concerned – but because I know what his future will hold I am absolutely disgusted and worried for him. I fear that his fate will be like those that came before him and that his life will mean only what his handlers want it to mean, much like Marjoe Gortner and unlike Marjoe; Kanon, Moraes, and Durham may not find themselves able to escape.

I think these kids show us two things;  that some adults will go to any lengths and use any tool they can find to push their religion (and make a profit from it in the process),  and that manipulating people through the art of magnetism is so easy that even a child can learn it and do it well (In the cases of Durham and Moraes).

If these children and all that might come after them are to no longer be exploited there is going to have to be a change in the Christian community.  Instead of finding this stuff cute you must instead begin to find it disgusting and exploitative. You,  Christians, must  take a stance against it and protest these movements within your own ranks. This is yet another problem within the church that  I and the rest of the atheist community can’t fix for you. You’ll have to gather up the gumption to do it yourself. I challenge you to do so and take a stand for these kids.

Here’s a short preview of the documentary, which I’m sure will be re-aired at a later date. If your blood pressure doesn’t similarly rise then I highly recommend you rethink a few things. I’d love to hear your thoughts in the comments about the affect that child preachers have on your opinion of the Christian faith.