Note: In this post you’ll notice that I lump various groups into a single group. I call atheists, skeptics, agnostics, and etc all Humanists – largely based on the assumption that most of us are. If you don’t identify as a humanist please don’t take offense to this post or that categorization, it was done for the sake of simplifying the language of the post and for the sake of brevity. For the sake of clarity I am providing a link to the Humanists Manifesto II.

New atheists, we non-believers who dare to speak out against the evils we perceive inherent to religion, are consistently victims of a great number of stereotypes.  “Atheist jerks” or “angry atheists” are pretty common perceptions among those who maintain a faith system, but now it seems that those within our congregation might be growing weary of the people that cause these brash stereotypes to befall  the rest of us.

Don Rasmussen recently implored his fellow atheists to “stop being jerks” and identifies a number of things that he believes atheists should stop doing in order to improve our public image. Most of the things he alludes to — suing to keep manger scenes off of public property, suing to keep religious displays out of schools, etc. — really aren’t so ‘jerky,’ as they are intended to enforce the establishment clause of the Constitution, but that doesn’t mean that Mr. Rasmussen doesn’t make some very good points.

How can I ask 27 million Texans to put up with me if I act like they not only disgust me, but I’m entitled to legislate my disgust upon them?  How many nativity scenes have to be banned before Christians accept me? It’s a ridiculous strategy that makes enemies, divides people and carves up freedom; throwing away the parts that aren’t easily digestible.

In small part here, I think Mr. Rasmussen is dead on but please allow me to correct bits of it:

I don’t believe that lawsuits over manger scenes curtail freedom at all, people are allowed to put manger scenes on their private property all day long and I’d never even suggest that lawsuit is appropriate – it’s the fact that we all pay for the public lands and grounds that makes it reasonable to protect them from religious display.

Where Rasmussen is correct though is that it DOES divide people, and it DOES make enemies.  Atheists today don’t need more enemies and our country doesn’t need more division.

I’d like to pose an alternative to the American Atheists model of throwing lawsuits at every cross they find – here’s a screen cap from something I posted on my Facebook page in June of 2012: 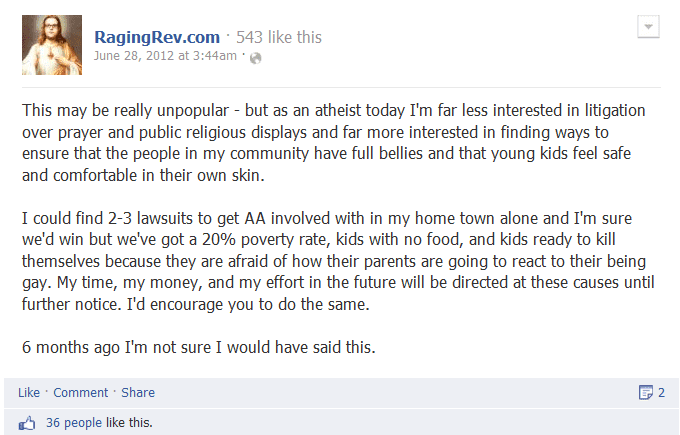 This model doesn’t focus on being in the right, it focuses on being good and doing good.

I’m going to call this model the “Do it better” model. You see, atheists and agnostics don’t have a deity telling them what to do – we don’t have a James 1:27 telling us to care for widows and orphans like Christians, and unlike Muslims, we don’t have the zakat requiring that a percentage of our income go into helping the poor. What we do have, what all humanists have,  is a shared existence on this planet with theists. That shared existence leads me to a humanists  philosophy that requires as much social endeavor toward goodness as any other philosophy might but for some reason this endeavor hasn’t manifested itself in these cost efficient, good ways of helping real people.

I propose that we atheists of the world put our humanism into practice first before we concern ourselves with litigation and division. I propose that we solve what the combined efforts of Christianity and Islam have failed to do for the last couple of millennia  by focusing the bulk of our efforts on the truly important things: ensuring that the people in our world can eat, protecting the weak from abuse, and ensuring that liberty is extended to all people. I’d like to do these things better than those with a mandate to do so. I believe that this sort of action would not only repair the damage done to the atheist/humanist/skeptic/agnostic communities by fundamentalist religion thru the hate and propaganda we’ve earned by spending our time on less pertinent actions – it will also endear us in the hearts and minds of those we’ve taken the time to do good for. When we’ve become what people expect from big religion we won’t have to worry about fighting legal battles anymore because people will respect us enough not to push those buttons.

The way to transition from the most hated minority in the USA isn’t to call the ACLU every time someone wastes money and effort on a public religious display or spends millions of dollars erecting giant crosses throughout the country – it’s to do what they should be doing with their time, effort, and money: fulfilling the duties they are currently too distracted to worry with.

Let’s face it, they have more money and power than us – but I believe we have the compassion required to do this right around the world.  Let them spend 1.1 million dollars on a giant white cross in the American South (because we don’t have enough crosses around here) while we spend our efforts on food banks in our local communities and finding other ways to help real people with real problems. Without the distraction and threat of Hell we can focus on real problems.

Now, let me be clear for just a moment – I don’t believe that all Christians and all Muslims do nothing for other people. I don’t believe that at all. I know that the majority of the charity in the world comes from people that are either Christian or Muslim, of course – one would expect that considering they consume the majority of the population. Consider, however, that so much of the charitable giving that Christians do goes directly to their churches and then directly into overhead – like pastor salaries, staff salaries, building mortgages, , and evangelism that simply isn’t focused on helping people in “non spiritual” ways. So little of the donations churches receive actually goes into feeding the hungry that it’s an absolute travesty – I suspect that if most Christians were more aware of the expenditures of their church they’d actually pull out (and you do, by the way, have the right to view the financial records of any church you are a member of – it’s the law). These “charitable” businesses simply aren’t efficient at helping people, even if well meaning members and donors believe they are!

Humanists, atheists, agnostics – the whole lot of us should rethink how we do things. I think I’ve given a brief argument for the way I think we can do good and make our name good:

We can do what they should be doing better than they are. It’s really that simple and it starts with me.

Ray Comfort Vs The Evil Atheists

Ray Comfort–an open invite and a rebuttal to a video